We Covered the Players at OU Stadium! 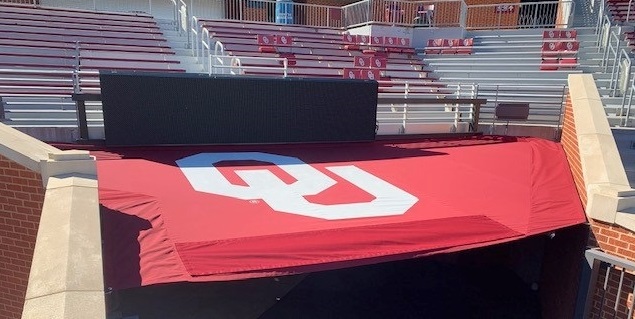 Industrial canvas can be found everywhere and in plain sight.

The tunnel banners are secured to the brick walls with stainless steel turnbuckles and anchors. These heavy duty attachments are typically used in shade sail applications. The stadium banners are attached to 1″ x 2″ / 2″ x 2″ aluminum frames. The fabric is wrapped around the framed and screwed to the bottom of the 2″ x 2″perimeter.

Velcro rafter pockets secure the middle portions of the stadium banner to the frame to help alleviate or reduce the fabric (Remove: from) moving and rubbing on the aluminum framework.

The pictures show the tunnel banners at OU Memorial Stadium, over tunnels the players enter the field through.

Most points in a season: In 2008, Led by quarterback Sam Bradford, the Sooner team scored 716 points.

Give Us A Call!

We’ve worked with many different industries, to help supply their specific canvasing needs. Need a winning custom cover or awning? Call in the experts!